Where applicable all images and quotations contained in this blog are copyright their respective owners. They are only used here for educational purposes and I will remove them immediately if anyone objects to their inclusion.

The End of the Horror Comic

By way of an addendum to the previous post (itself a holding entry until I have the time and energy to start blogging on a regular schedule) here are some scans from a copy of Picture Post dated Nov 20th 1954 that I recently acquired. This was the second time the prestigious magazine had turned its sights on the subject of comics (the first occasion being May 1954 under the headline 'Should U.S. 'Comics' be Banned?'), and it is noticeable that public opinion on the subject had become increasingly heated during the intervening period. Interestingly, the emphasis had switched somewhat from US comic books in general to the newly emotive concept of 'Horror Comics' - though the anti-American agenda of Communist Party activist Peter Mauger is still evident (the fact that the supposed degeneracy of these violent American titles was strongly contrasted with the natural 'goodness' of home-grown comics such as Eagle, Swift and Girl is hardly surprising when one considers that they were being produced by the same publisher as Picture Post itself!) Elizabeth Taylor presides in regal splendour over a cover which asks the question
"Horror Comics: Is this the End?" 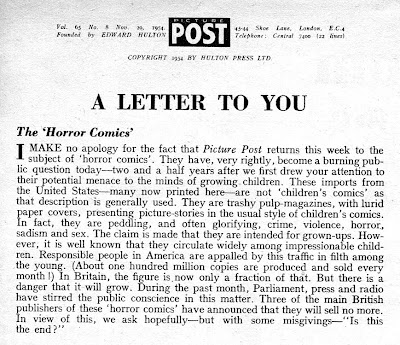 Editorial in which publisher Edward Hulton makes a clear distinction between the innate wholesomeness of his own line of 'children's comics' and the looming menace of a transatlantic 'traffic in filth'! 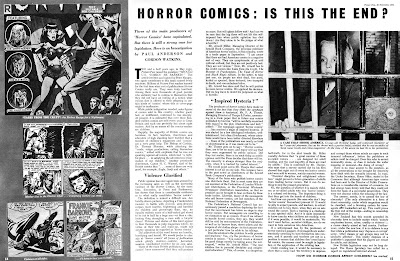 Paul Anderson and Gordon Watkins chronicle the last days of the 'crude' and 'vulgar' Horror Comic (with particular reference to EC's Tales from the Crypt) - while finding time to applaud the many virtues of Hulton's own Eagle and Swift! 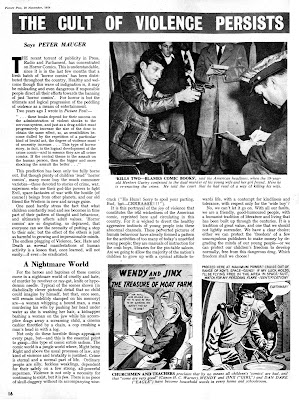 Communist Party activist Peter Mauger broadens the attack to those American comic books which feature "stories of crime, war, supermen who use their god-like powers to fight Evil, space-fantasies of war with the hostile (of course!) beings from other planets, and our old friend the Western in new and savage guise"...almost all of them in fact! Fortunately, there is just enough space left to mention those British comics which get an unqualified seal of approval from 'churchmen and teachers' everywhere - namely Hulton's own Girl and Eagle! 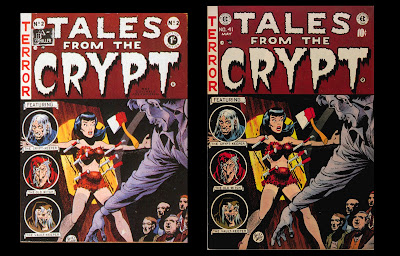 The second (and final!) British edition of Tales from the Crypt published by Arnold Miller (as referenced above) alongside the original US cover of EC's Tales from the Crypt no.41. Unfortunately Miller's deliberate addition of a 'not suitable for children' label was brushed aside as mere hypocrisy - as was the assertion by F. A. Thorpe (of publishers Thorpe & Porter) that "eight out of ten horror comics sold were sold to women, mainly married women".